I just came across this and I have to say I’m absolutely gobsmacked. Tobias did a promo for a new French station opening up in Britain called BIRTHUK. What was surprising is how Tobias was acting so smug and he even did a Black Jack nose sneer. I was delighted. However, the fun part of it there was a bartender in the back making Tobias a drink. And the bartender ended up by eing Tobias’ GAME OF THRONES co-star Kit Harington (Jon Snow). Funny Edmure and Jon never met. But this is precious. Here’s the video and a behind-the-scenes shot of both Tobias and Kit.

If a French production house is looking to make the official announcement of its UK launch, who better to turn to than a couple of locals? Thanks to the support of Tobias Menzies of ‘The Crown’ and Kit Harington of ‘Game of Thrones’, Paris-based BIRTH found some of the best to break the ice. ‘The Fabulous New Roster of the Bloody French’ introduces BIRTH UK, whose launch marks an important step in the production company’s international expansion, as it also opening an office in Algiers, 2Horloges. 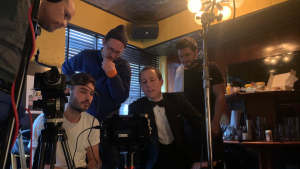 Self-deprecating and slightly absurd, ‘The Fabulous New Roster of the Bloody French’ was created by executive producer Maëva Demurger and director Leo Bill, and came about thanks to a friendship they developed with Tobias working on another project.

When the time came to announce the launch of BIRTH UK – which opened one year ago – the pair wanted to get just the right tone with a distinctly British feel. And how much more British can you get than one of the stars of a series featuring the royal family? The story grew from there.

“As Leo and I developed the idea, we then thought it would be good to have somebody else for Tobias to play off. A crazy notion came to mind: what if we could get Kit Harington? Amazingly, we managed to get in touch, told him about the concept, and to our delight, he loved the idea and was more than happy to come on board,” explains Maëva.

Director Leo Bill said: “Having known Tobias and Kit for some time now, it was amazing to get to work with them on one of my first shoots. They were both very cool and incredibly game to enter my slightly absurdist mind!”