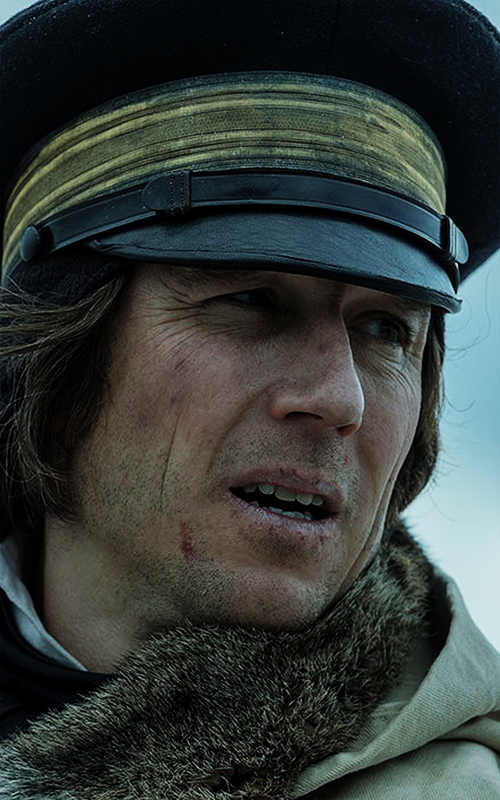 Tobias Menzies, who plays Capt. James Fitzjames on AMC’s The Terror, discusses how his character changes over the course of the show, his altruistic act for the sake of the men and why he’s finally able to be honest with Crozier.

Q: How much did you know about the history of the Franklin Expedition or Dan Simmons‘s novel before you were cast in the show?

A: I didn’t know anything about the history of the Franklin expedition or Dan Simmons’ novel before this project. One of the thrills of working on The Terror was learning and reading about this remarkable part of British naval history and British polar exploration.

Q: What aspects of Fitzjames did you most relate to?

A: I related to Fitzjames being a construct, that deep down he feels he is a fake, that he has to outrun his uncertain parentage, that he doesn’t truly belong, that he has to become other than he is to survive and succeed.

Q: Franklin is driven by his faith while Crozier is driven by experience. What do you think guides Fitzjames’s decision-making in the early going?

A: Fitzjames is a product of the Royal Navy and its patronage system, it has given him success, fame and position. So in the early part of the story we tell, the command structures and rules of the Navy are strong guiding principles for him: they’ve seen him right thus far, and he believes they will see him through this latest challenge.

Q: The disaster at the carnivale is somewhat of Fitzjames’s making, since it was his idea. Does Fitzjames carry guilt from that?

A: Fitzjames carries huge guilt for the Carnivale disaster. He is a captain, and one of the primary responsibilities of a captain is discipline and maintaining order and safeguarding the physical and psychological welfare of his men. The Carnivale breaches all those. I felt he shouldn’t be the same man afterwards.

Q: To that end, in Episode 8, Fitzjames reveals the truth about his rise through the Navy. How hard is it for him to admit those things to Crozier? What does it say about the men’s relationship now that he can be that honest with him?

A: I actually think one of the effects of what these men go through is that boundaries start to break up. I also think it’s significant that that conversation happens away from the ship. It’s the first time in years Crozier and Fitzjames have been alone and haven’t been within earshot of hundreds of men under their command. Alone together in that frozen desert, Fitzjames is able to speak with greater candor than we have seen before.

Q: Also in Episode 8, Fitzjames gets his most direct interaction with the Tuunbaq during the attack on the camp. What does he make of the creature and the men’s chances of defeating it at this point?

A: I don’t think Fitzjames is a particularly religious man beyond the standard Christian mores of his time, and is certainly disinclined to entertain the more esoteric theories about what this creature is. He knows that it is attacking them and needs to be killed, and focuses on that.

Q: In Episode 9, Fitzjames’s illness overtakes him. How hard is it for him to ask Crozier to put him out of his misery?

A: I think the need outweighs the shame he feels at asking.

Q: What does it say about Fitzjames that he tells Crozier to use his body to feed the men?

A: I’m not entirely sure what it says about him. It’s a sacrilegious thing for a Victorian to say. Canabalism is a human taboo, then and now. It shows that at that moment, the priorities of survival have superseded moral considerations. And it shows an altruism in Fitzjames, a self-sacrifice, which I think he would not have found within himself at the start of the story.

Q: Of all the terrors the crew faces throughout the show, which would you be most afraid of in real life?

A: I think I would not have coped well with having a leg amputated while fully conscious and without anesthetic.

The Terror Season Finale airs Monday at 10/9c. Be the first to see what mysteries are uncovered and get updates on The Terror by signing up for the Insiders Club.