The ‘Outlander’ Men on Auditions and Adaptations 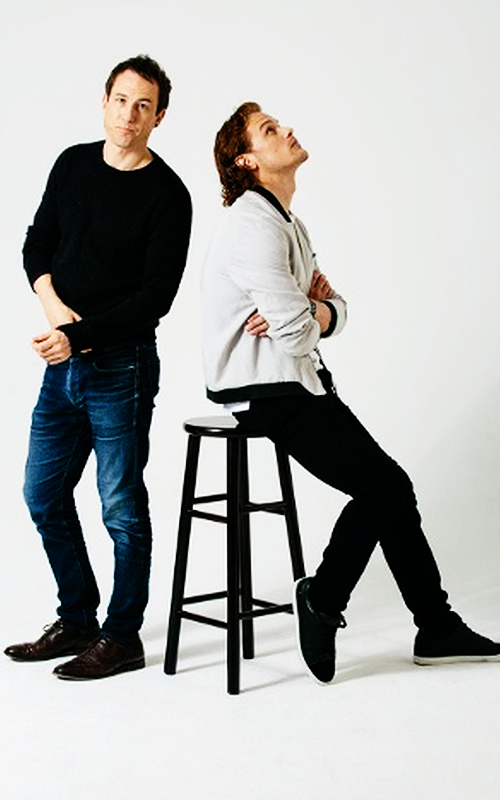 Fans of Starz’s time-travel drama “Outlander” may be surprised that no one asked Sam Heughan to take his shirt off during the audition process.

That may sound reasonable, but as viewers know, Heughan spends much of his onscreen time flashing some serious skin—and as it turns out, the series lucked out with the Scot when it comes to physiques.

“I’ve been in many auditions thinking, God, do I have to take my shirt off? It’s quite a physical role…,” Heughan says while his co-star—and onscreen nemesis—Tobias Menzies chuckles across the table. “It’s quite exposing, actually. But no, they didn’t [ask]. And at the time, I was keeping quite fit. So it was all right!”

WATCH: Why the Acting on ‘Outlander’ Is Parallel to None

For the legions of fans who have turned Heughan and Menzies into the thinking woman’s sex symbols, it turned out to be a bit more than all right. Fiercely protective fans of Diana Gabaldon’s series of novels detailing the time-traveling adventures of World War II–era nurse Claire Randall (Caitriona Balfe), her 1940s husband, Frank (Menzies), the dashing 18th-century Highlander hunk she ends up marrying, Jamie (Heughan), and Frank’s sadistic ancestor Capt. Jack Randall (Menzies again), almost immediately relaxed when the series premiered in the summer of 2014. Here were Jamie and Black Jack and Claire brought to life in ways that very few adaptations manage. And though the show quickly made a name for itself for its vivid sex scenes—the website Vulture recently heralded the show as “the best sex on television”—what is less frequently discussed is the high-wire act its actors must perform to ground the material.

“It’s some of the hardest stuff to sell, I think, in acting,” Menzies says. “The time traveler element of the story is the most esoteric aspect. And if you wink, you’re kind of done. The air will deflate out of it.”

Both Menzies and Heughan are serious about their performances on “Outlander,” down to questioning dialogue or storylines.

“There were some quite overt direct speeches in the novel, which can be quite bumpy,” Menzies says. “An example is Claire’s ‘Jesus H. Roosevelt Christ.’ Which obviously all the fans are obsessed with. But I know Cat spent a lot of time going, ‘I don’t know how to make this work for me.’ She really wrestled with it. And that’s part of the adaptation process.”

Heughan agrees, saying that an open-door policy on the part of the writers has been “really fruitful, I think. You are the one person who is looking only at that journey, that one character. The writers are looking at the structure and different characters and how they all kind of interact. So it’s always an interesting thing to stand up for.”

And Heughan and Balfe were both concerned about Jamie and Claire’s relationship at the beginning of Season 2. The last episodes of Season 1 found them struggling to reconnect after Jamie’s rape at the hands of Capt. Jack, and the finale saw the pair sailing to Paris. But when Heughan and Balfe read the first scripts for the new season, they went to the writers.

“It felt like [Jamie and Claire] got over what happened in Season 1 and there wasn’t enough of a hangover,” Heughan recalls. “And we went back to them and actually, they completely reworked it. It was great to see [showrunner] Ron [Moore] going, ‘OK, we can delay that and move this forward here.’ It’s great fun to be able to have that influence on the script!”

The first few episodes of Season 2 were difficult for both men: Menzies returns for the first time as Frank after spending most of the previous season in Capt. Jack’s shoes, and Jamie moves from the outdoors to the lavish world of Paris and all the foppery and frills that entails.

“I remember the first few weeks just looking for the character, like, where is he. Where has he gone?” Heughan recalls. “He’s still not himself and he’s also pretending to be someone else [in the French courts]. I wanted to play him like half a man, like he’s lost his sparkle.”

As difficult as it was to return to a character after a hiatus and find the setting and the circumstances vastly changed, Balfe has nothing but praise for Heughan. “The two of us were quite apprehensive; it felt like we were being thrust into this new world,” she says. “And Sam had this beautiful storyline suffering from PTSD and he was so fantastic; he has this physical strength but then this softness that’s so beautiful to watch. Given these circumstantial shifts, as Sam and I were experiencing discomfort, so were Claire and Jamie. It helps to feed our journey as characters.”

As for playing opposite Menzies as Frank in the first episode of the new season, Balfe raves, “Tobias was so wonderful in those scenes, and he came to it with such hopefulness. His emotion was so honest and at hand, it was great. It just feels so wonderful to go to scenes like that with him because you feel like you’ve had an acting exercise in some ways.”

The remarkable thing about Menzies’ performance as both characters is that he’s instantly different with very little external change—and yet you can see echoes of Capt. Jack in Frank.

“There’s something intuitive about [creating a distinction],” Menzies says. “In the very broadest terms, Frank’s physicality and demeanor are much closer to me. And Jack is more of a stretch. But how he holds himself, the costumes help with that a bit. And then the rest is trying to make it about the moral code, the outlook, and play that rather than crude physical indicators, like one has a limp and one doesn’t,” he adds with a laugh.

The amount of heavy lifting that Menzies and Heughan do as their characters can be lost in the shuffle of lavish sets and costumes, plentiful nudity, and Balfe’s fierce performance as a woman out of sync with her times, but make no mistake: These two have created fully realized men, both of whom undergo major transformations in subtle ways. While Menzies worked to differentiate his two roles, Heughan and Moore were discussing Jamie’s Season 1 trajectory, and Heughan sought out small, nuanced ways to convey his growth from impulsive man-boy to a more measured then almost broken man over the course of 13 episodes. And though the results have led to stardom and screaming fans for both in America, the attention paid to them in Glasgow is vastly different.

“In Glasgow no one cares about us,” Heughan says when discussing the intense fan love the show has inspired. “The other day I was walking down the street and some car drove past and they’re like, ‘You! You! “Outlander!” ’ I was, like, ‘Yeah!’ And they’re, like, ‘Wanker.’ ” Heughan and Menzies both laugh.

“It’s kind of great, actually,” Menzies says. “We’ve got a healthy level of just being disregarded a little bit.”

Asked for their worst audition stories, neither Menzies nor Heughan hesitates for long. “I mean, God! I think there’s so many,” Menzies says. “That’s the truth about early on. It’s 90 percent humiliation, isn’t it? Just going in and kind of crashing and burning and also doing things that you look back and go, Why on earth was I being seen for that? I was just so wrong. I remember auditioning for ‘Moulin Rouge!,’ the part that Ewan McGregor played. I was so young, I was literally just out of college. But they were just doing that sort of mass casting, just ring up everyone and put them on tape. And I had to sing and dance and it was just ridiculous. What was I doing in that room? Terrible! I tried so hard, it was so terrible!”

As for Heughan, he shudderingly recalls an audition for “Mamma Mia!” that coincided with his performance onstage in Noël Coward’s “The Vortex,” which meant that he was sporting a stylish 1920s mustache at the time.

“I was just completely wrong for ‘Mamma Mia!’ anyway,” he says. “I was working with Will Young, this British musician, and he helped me with the song. He was, like, ‘This is really high, I’ll transfer it down an octave.’ So I felt reasonably comfortable with it. And I went in and I gave it to the piano player and I was, like, ‘I’m just gonna put this down an octave.’ And he was, like, ‘No you’re not. I’m the musical supervisor, you’re going to do it like this.’ It was like strangling a cat, singing for ‘Mamma Mia!’ ”