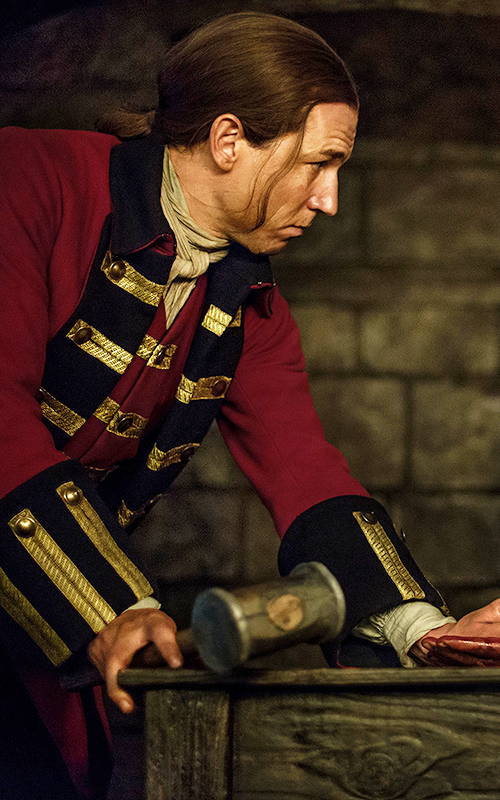 “Outlander” season 1 is down to its last episode titled, “To Ransom A Man’s Soul,” which airs on May 30 on Starz. The series recently aired one of the most controversial scenes on TV, which showed the torture scene between Black Jack Randall and Jamie Fraser. Tobias Menzies, who plays Black Jack, defended his character and explained that Black Jack is not about “being evil or nasty.”

“Outlander” recently took on one of the most painful scenes from Diana Gabaldon’s eight-book series, which broke the hearts of many viewers. While some viewers thought that the scene was purely for Black Jack’s pleasure, with others calling him “gay,” Tobias Menzies insists that the act was more than just physical and sexual torture.

The actor also explained that he finds it “exciting” to know that Black Jack has successfully got in the way of a “beautiful romance.” Menzies also had to refrain from speaking with Sam Heughan in between takes to “keep it as fresh as possible.”

Menzies also dismissed several notions that Black Jack is gay, especially when he seemed to take pleasure in trying to rape Jenny in one of the episodes in “Outlander” season 1. The 41-year-old actor said that Black Jack takes interest in Claire because he finds her a notable and worthy match of his skills and abilities and the competition simply gives him pleasure.

“When he does commit sexual violence, that is the tactic rather than the end. He uses these things in order to break people down, in order to get what he wants,” he said.

Diana Gabaldon previously slammed rumors that Black Jack is not gay in any way. The author said that Black Jack is rather a pervert and a sadist who “derives sexual pleasure from hurting people” without any preference on the gender of his victim.

“Outlander” season 1 finale airs on May 30 on Starz.