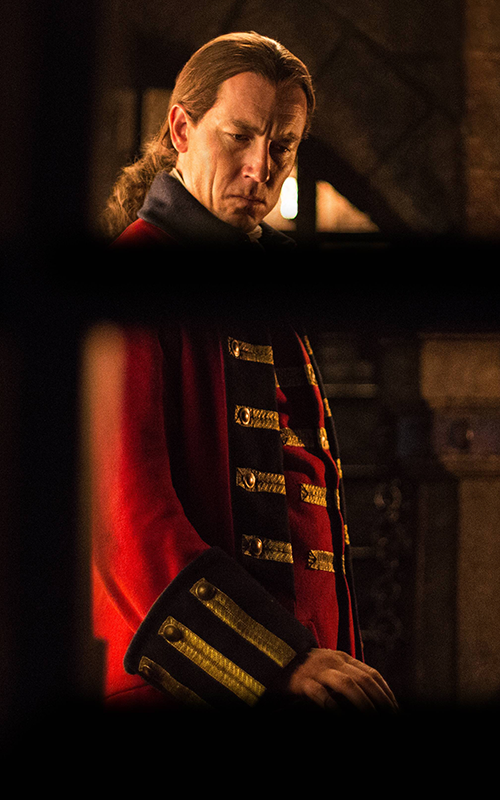 SPOILER ALERT! Don’t read this if you weren’t one of the 5 million viewers who tuned into the first season of Outlander.

Fans may dig the romance-for-the-ages between Jamie and Claire, but the hit series that’s based on Diana Gabaldon’s best-selling book series is just as much a historical tale as it is a psychological drama. The most-talked about scene from season 1 was when English captain Jonathan “Black Jack” Randall (Tobias Menzies) sodomized and tortured Jamie (Sam Heughan) in a prison cell. It’s a gut-wrenching sequence, which is no doubt why Menzies earned a Golden Globe nomination for his performance (and why it’s egregious that he and Heughan were overlooked for the Emmys).

EW asked the two actors to talk about the psychology behind the scene from Episode 15, titled “Wentworth Prison.”

SAM HEUGHAN: We approached it a lot like a play. Tobias and I come from theater background so we spent about a week just working through the scenes and discussing the text and making any adjustments that we felt were needed. We sort of did a rough blocking and worked out what was going to happen, where and how. But then, obviously on the day, you just have to kind of go for it.

TOBIAS MENZIES: It was about trying to get the tone right. I was keen for it to be as psychological as possible. I just didn’t want it to feel sensational. If you’re going to have Jack rape Jamie, you have to really earn that, really get to a place where that scene is within the realm of the story. Sam and I didn’t talk a lot [while shooting those scenes]. We would sort of kept to ourselves between shots. But again, one of the good things is how we had been working together for a year so we had a fair amount of trust.

HEUGHAN: It’s not about rape. It’s not about the act at all. It’s about two men battling their wills to beat each other. Obviously Claire is involved in this so it’s about honor. It’s about a man’s word and this battle that’s been going on between these two characters ever since day one when Black Jack Randall started this never-ending battle. It’s kind of epic and it continues throughout season 2.

MENZIES: I don’t think Jack hates Jamie. I think he is stimulated by him. He’s intrigued by him. In some way Jamie represents everything that Jack isn’t, and you both love and want to destroy the thing that you can’t be. He’s drawn to this person. Jack is someone who is interested in pain and people’s pain thresholds. He’s sort of clinical in his atomization of Jamie. But that’s almost what makes it more chilling, because this doesn’t come out of rage or anger or resentment or revenge. It’s none of those things. It’s calm. It’s precise. And that felt truer to some sort of sadistic quality. One of the things that we ended up deciding is for Jack to unravel Jamie in some way. He intuits that Jamie is built on Claire. She is Jamie’s safe place. In that scene when Jack is sort of leaning over him, trying to get to him, Jamie is saying Claire’s name. That’s when Jack understands how that is the person he has to contaminate. It’s all about, in some weird way, embodying Claire. If he can poison that relationship, then he can undermine who Jamie is in a very profound way.

HEUGHAN: Physically Jamie can deal with anything. And I think we saw that throughout season 1. He can put his body on the line. He has much more to lose now he that he’s got Claire. We found out at the end of season 1 that she’s pregnant. So, he’s got an added responsibility. And he’s got this mental thing now. Normally he can shake something off. But [the rape] has really affected him. It was really dark and tough and probably some of the most testing stuff I’ve ever done but I kind of really enjoyed it. I think every actor enjoys putting themselves through something like that because it’s a challenge. It’s fun to play off someone like Tobias. He’s a great actor and it’s good to go to those dark places. I was really exhausted and you just can’t wait to leave [the set] but I was really lucky to have such a strong storyline.