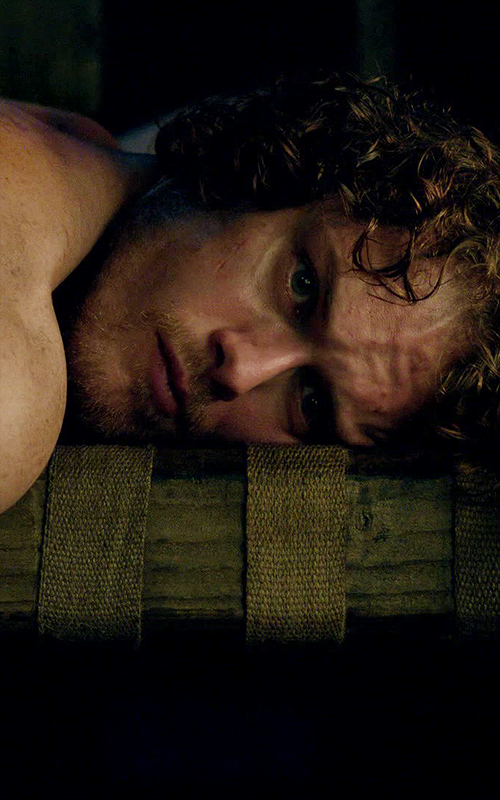 Season one’s penultimate episode got pretty Catholic, what with all the Passion Play, Jamie-as-our-Lord imagery. The finale takes us even further into the darkness and then, of course, the light. But the darkness … it is impressive, even by the standards of cable television. It puts the recent brouhaha over Sansa Stark and Ramsey Bolton’s wedding night to shame.

First things first, though: We have to free our hero. How will Jamie’s wife and clansmen manage to rescue him from the Pit of Despair at the very bottom of Wentworth Prison, where he has been savaged — and ravaged — by his besotted arch nemesis Captain Jonathan “Black Jack” Randall? As it turns out, all they need is one very large, hairy diversion.

A herd of cattle storms the prison basement, knocking Randall flat when he goes to investigate the hellish sound of hoofs echoing through the stone halls. The clansmen following the beasts give Randall the barest glance. Seeing him unconscious and bleeding, they leave him for dead and instead go after Jamie – who is semi-conscious at best, and bleeding, and naked, and looking rather the worse for wear. Though still beautiful, of course, and still awfully like a hunky Scottish Jesus.

Murtagh swaddles Jamie in his plaid and the clansmen manage to spirit Jamie away while the British remain distracted by the cows. A-plus plan!

Further down the road, Claire waits impatiently, wearing pants that fit her so well I’m jealous. I can hardly find flattering jeans in the 21st century — how on Earth did she get a pair in an age when no woman would be caught dead in them? No time to ask her about it; the boys come rattling up with what remains of Jamie in the back of a cart, and Claire jumps in there with him.

Shortly thereafter, our heroes have reached a monastery. In the book, the monastery is in France, but the Starz team has to wrap up this story in less than an hour and there’s no time to cross the Channel, so local monks will have to do. Jamie is raving; he doesn’t recognize Claire and won’t let her touch him. “What did Randall do to you?” Claire asks, in desperation.

Then, though it’s the last thing we want, we are treated to a flashback of Jamie’s torture, which is one of the more perverse bits of television I have ever seen. Tobias Menzies holds nothing back in his portrayal of a creatively sadistic villain who is in love with his victim, and he deserves all the Emmys. But that doesn’t make these scenes easier to watch.

“Jamie,” says Randall at one point, his voice almost gentle, “I just want this to be a pleasant experience for us both.”

When that approach doesn’t work, he tries plan B, flipping Jamie over across a wooden table and pounding into him while instructing Jamie to scream. Eventually Jamie has no choice but to oblige.

Randall uses every tool at his disposal — pain, relief, lust, and even the specter of Claire — to break Jamie. And he succeeds. “He made love to me, Claire,” says Jamie, disgusted with himself. Not only that: Randall branded him, too, with his initials, as though Jamie were a monogrammed towel. Or rather, he had Jamie brand himself.

Jamie’s dark night of the soul with Randall is a perfect and sickening inversion of his wedding night with Claire, in which he had sex for the first time. That night with Claire was, for Jamie, a bit like being born again; this night with Randall saps Jamie of his will to live. To put it as bluntly as possible, Claire made him a man; Randall makes Jamie his bitch. And Jamie, with his Highland notions of masculinity, cannot endure having been treated that way, having had his agency and dignity stripped from him. Even after being rescued, Jamie wants to die. Only through death does he figure he can regain himself.

Claire, however, has other plans — for him, for them both. As she tells a sympathetic monk in the chapel, to whom she unburdens herself, why on Earth is she stuck in the 18th century if not to be in everlasting, triumphant love? Nothing else makes narrative sense. The monk seems to agree.

These monks, by the way, cannot be shocked: not by a cross-dressing female doctor who appears at their gate with a bunch of brigands, one of them a suicidal prisoner, and not by her admission that she is a bigamous time-traveler. They must be as exceedingly well-trained as Jeeves.

They also continue to help Claire treat Jamie, as she sets the broken bones in his hand and, later, after a powwow with Murtagh, as she decides to venture into the darkness with Jamie in order to save him. Which means, you guessed it, more flashbacks. And more painful ones, too.

Almost since their invention, moving pictures have been used to show young, beautiful women suffering at the hands of bad guys. Outlander flips the script. Although Claire, Jenny, and other women have been in plenty of danger over the course of the season, and we got quite used to seeing them stripped at least partly naked, the show’s most gruesome, in-your-face sexual violence is reserved for, of all people, our male hero. He is degraded, lusted after, treated like an object. He needs to be saved.

It is startling and upsetting to watch Jamie’s abuse not merely because it’s rape — though that is awful, we have seen rape before — but because it’s the rape of a good guy. That is almost without parallel in pop culture. The last time I saw treatment so graphic and brutal was probably American History X, and there the violence was visited upon a Nazi in prison. No wonder Jamie wonders whether he can survive; there is very little pop-cultural precedent for his situation.

Jamie does come out the other side of his trauma, eventually, with Claire’s determined and passionate help. She refuses to see him as less than who he is simply because of what he was been through. They weep together, but she does not pity him; he does not disgust her. Together, they re-frame what happened: He is not a victim; he is a survivor. And so he can go on.

It is a very strong statement, perhaps a paradigm-shifting one for television. A man is no less a man, and a person is no less a person, for having gone through something terrible.

Once Jamie decides to live, he has the others help him cut out Randall’s brand from his skin, and he, Claire, and Murtagh book passage on a ship to France. Out on the water, it is Claire who is hanging over the railing looking green. When Jamie ribs her about this, a little, she tells him that what’s plaguing her isn’t seasickness. Jamie is going to be a father. Oh, and the two of them have to try to change the future so as to avert various disasters of Scottish history. Jamie embraces Claire and laughs, a man with a destiny, looking, once again, young and strong and whole, and ready for season two.