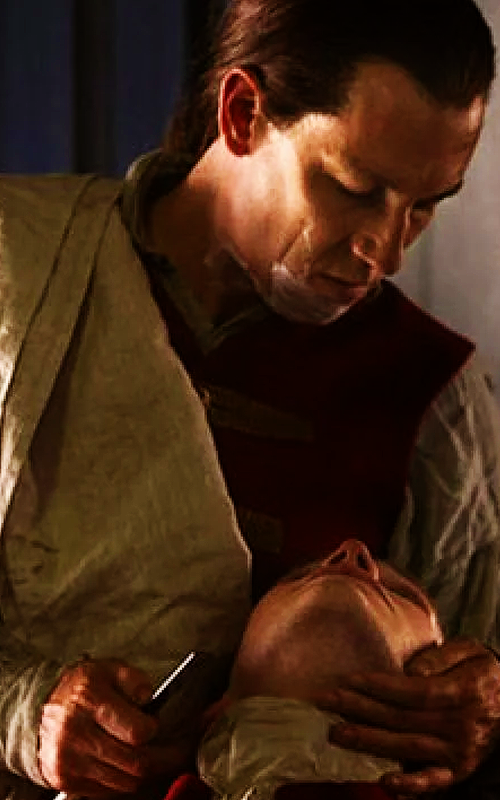 Fans will recognize Brit Tobias Menzies from his role as Red Wedding groom Edmure Tully on Game of Thrones, and though Edmure’s fate is unknown, you can still catch Tobias on pay cable. The actor is tackling a big challenge playing two seemingly opposite roles on Starz’ new historical romance, Outlander, and giving ET a preview of the action.

Based on the hugely popular books by Diana Gabaldon, Outlander follows 1940s nurse Claire Randall as she accidentally travels back in time to Jacobite Scotland by stepping through a Stonehenge-esque circle. In the 1700s, she encounters sexy Scot Jamie Fraser, but also (to her great misfortune) bumps into a sadistic British officer named Black Jack Randall – who happens to be her husband Frank’s ancestor, and looks just like him.

Tobias plays both Frank and Jack and jokes that the biggest challenge of playing two characters is “remembering what their names are.” In all serious, he tells ET that he tries to “differentiate them without being too heavy handed about it.”

“You’re striving to have it so there’s a different sort of look in the eye, and trying to be subtle about that,” he says.

In episode six, airing Saturday, September 13, Claire and Black Jack find themselves face to face at a British army outpost in the Scottish Highlands. Tobias previews, “It’s a change of pace for the show. Having had a sweeping, dramatic, dare I say romantic, few weeks out in the Highlands, the lens goes right down to a chamber piece between Jack and Claire.”

“It’s based on no more than a page and a half in the book, which the writers have sort of folded out into most of an episode, which is Jack interrogating Claire. … It’s this long conversation the two of them have and it’s a chess game. It’s these two savvy operators trying to discover what each other’s secrets are.”

Tobias adds that the memory of Claire’s husband comes into play as well: “Claire almost can’t help herself but to try and find Frank in Jack.”

And when it comes to Frank, Tobias previews, “In episode eight, we have a whole chunk of Frank again. We see him a few months down the line, Claire having disappeared, and he’s sort of falling apart in the face of that, and we see some of his more belligerent and choleric qualities. So we see a bit of Jack in Frank, and there are arguably moments in [episode] six where Jack softens and shows his emotions so you see a bit of Frank in Jack.”

Tune in to Outlander this Saturday at 9 p.m. ET/PT on Starz for all the kilt-wearing, sword-wielding, heart-thumping action.

Previous‘Game of Thrones’ Alum Nabs Dual Role in Starz’s ‘Outlander’ (Exclusive)
NextCan We Talk About Those Rape Scenes in “Outlander?”