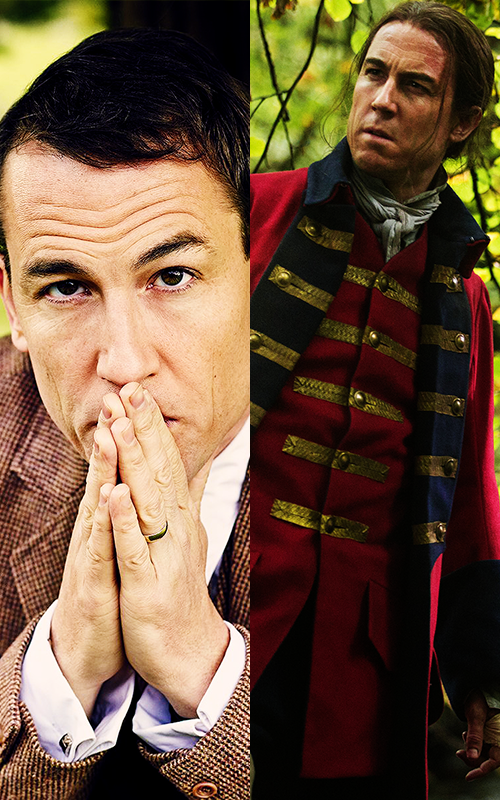 Fans of Outlander know that the show would be nothing without copious amounts of steamy sex, but up until this point we weren’t completely sure from where the writers drew the inspiration for the raunchy scenes.

While we’ve applauded the women in the writers room for putting an undeniably feminist twist on the R-rated encounters — it’s not often men gladly go down on women on television — it turns out that some of the kinkiest scenes were conjured up with the help of actor Tobias Menzies, who has portrayed both Frank and Black Jack Randall.

During a recent interview with The New York Times, Menzies discussed one of his 2014 tweets, in which he claimed that a lot of the kinkiness in the show “tends to be my idea.” Menzies further explained that he developed a great relationship with the writers early on and grew more comfortable sharing his ideas as he really started to understand what made his character tick.
“There was a writer on the show, Ira Behr, who wrote quite a lot of the Black Jack stuff, and he brought a fair amount of twisted-ness to it. A fair amount of sexual perversity,” he explained. “I remember him wanting to be very rigorous about the why — why Jack was doing what he was doing. The psychology. His agenda.”

He continued to one of the elements that defined Jack was his sadism, and that he wanted to ensure that each scene was about more than just sex; it needed to be about Jack’s insatiable quest to learn more about what Menzies called “the human condition.”

“[Jack’s] obsession with Jamie was about wanting to dismantle this person and realizing that Claire was the lock he had to pick for Jamie,” he explained. “That led to the stuff toward the end of Season 1, at Wentworth Prison, impersonating Claire, whispering Claire’s name. It was about making it not just ‘I want to rape Jamie,’ but more complicated…By trying to be as clear and particular about your choices, it can result in unusual decisions, and I think that’s a good example of that, because it’s a very weird moment. You’re not quite sure what’s going on, but it has an emotional truth about it.”

Things were different with Frank, though, Menzies said. Though the character was “handsome and passionate,” the actor didn’t want to make him a “too fussy” or “too academic” and sought to strike a contrast Frank and Jack’s demeanors, while still making him interesting and desirable to Claire.