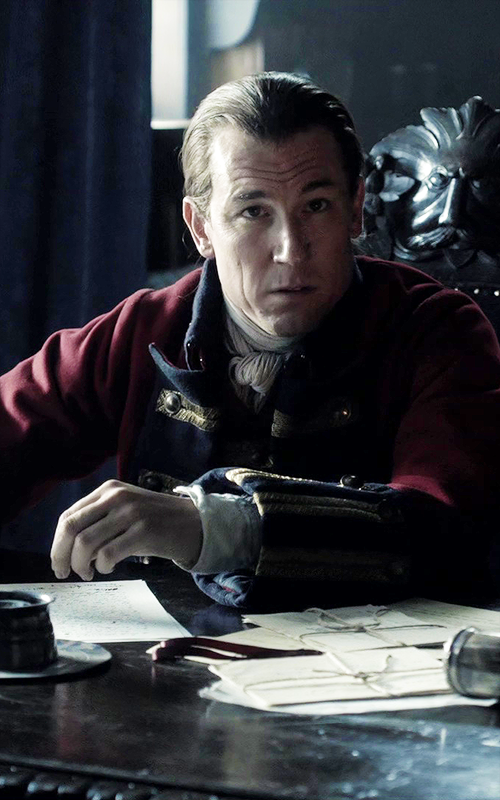 On Saturday’s episode of Outlander, we got some pretty major insight into the show’s most nefarious character, Black Jack Randall. The eye-opening discussion of his previous dealings with the Fraser kids — both Jenny and Jamie — have painted an even more intense picture of the very bad dude at the heart of the series’ central conflict.

So we went right to the source — actors Sam Heughan and Tobias Menzies (Jamie Fraser and Black Jack Randall respectively) — to get their take on what went down. If you haven’t seen Saturday’s episode, we suggest you tune in before reading this interview, as it contains major spoilers for “Lallybroch.”

Nerdist: What do you think about the darker doings we’re dealing with when it comes to Black Jack this second half?

Tobias Menzies: On an essential level it’s very enjoyable stuff to play because it’s rich and exciting; it gives you a lot of rope to work with in a way. He’s a really great and interesting and complicated character as baddies often are. We watch drama and we watch stories to live vicariously and see people do the things we’re not allowed to do and Jack is definitely in that honorable tradition. He says the things we wouldn’t dare to say. Obviously he goes a lot further into much darker waters [this half], but I think we’ve always had the tradition of dark fairytales, from childhood onward, and I think humans are always drawn to dark stories. It’s sort parable really, isn’t it? It’s a way of dealing with this sort of thing without having to experience it in our own lives.

N: Jamie in particular seems to have a lot of very complicated relationships in his life, like with Jenny his sister and Black Jack.

Sam Heughan: [laughs] Yeah it is very complicated. It all kind of goes back to that fateful moment that we flash back to in a lot of the episodes — the whipping and the flogging — and what he believe happens to his sister that he couldn’t stop with Black Jack. He also believes his father died and it was his fault at that point as well, so he’s got a lot of issues and relationships he’s not dealt with — he kind of ran away to France and Spain to fight these battles instead.

N: And yet he has an empathy that feels very unusual for the time given how he handled when Black Jack propositioned him.

SH: The flogging that Randall gives Jamie at the very beginning seems to be this moment that begins this whole epic battle of wills between them and it’s a fact that Jamie won’t give up and won’t surrender to Black Jack. Black Jack can’t break him and I think that’s where his fascination with Jamie comes from and the sort of weird bond between them.

N: Well, that also touches on this idea that the show works with really well — using sex and power subversively to angle its characters. What is it like being in those moments?

SH: I think it feels strong. I think if it wasn’t there, the show would be completely different and maybe something else. It’s really important and unsettling as an actor — we’re constantly having to ask to reassess who we are and who our characters are, and I think it’s amazing. I don’t want to give too much away for the end of the season but, it sort of calls into question a lot of the things we think we know about the characters and I think it’s going to constantly surprise people. I think that’s an important thing in a show, so the audience doesn’t get complacent.

The first half really had some time to breathe, but we’ve really taken off [in the second half]. Sometimes the changes are subtler, but I think it’s always on even ground and I think that’s what Ron Moore does. With each episode you think you know roughly what’s going to happen but it ends up being completely different. Like episode seven, where it suddenly started with Frank back in the forties. It’s constantly making the audience look at the situation from a different point of view.

N: What’s interesting about Black Jack is — he’s definitely a villain there’s no question of that — how we’re now seeing a lot of the machinations behind why he might be such a jerk.

TM: And so ruthless, yeah that’s right. [laughs] In a way it’s not my place to judge him — it was hard stuff to portray — but every good story needs a good villain and someone’s gotta do it so.

N: What do you think it is about Jamie that fascinates Black Jack in that way?

TM: He’s interested by people who can match him wit for wit. In all the exchanges he’s had with Jamie and Claire, really, there’s an element of chess about it, so I think rather than being put-off by that he’s drawn by the battle. I think he’s excited by that. And it’s certainly rooted it to the event when he flogs Jamie for the second time and witnesses this young man who’s able to endure more pain than anyone he’s ever seen before.

TM: I’ve always thought of the character as a study in sadism. And obviously for a sadist, someone who can withstand a lot of pain is of a bit of interest. [laughs] And I think that sort of piques his interest and it continues from there. I think the interaction between Jamie and Jack is less of the mental chess repartee and more a kind of meeting of, I don’t know, a good and bad angel, really. I think Jack is interested by the genuine uprightness and moralness of Jamie. Not in a pompous way, not in a trained way, but he has an inherent, fundamental dignity which I think Jack is able to recognize even though it’s something he himself may have lost. Doesn’t mean that he can’t be drawn by it — maybe even nostalgic about it. All of those things are mixed in.

N: Well, now that you’re saying that, it’s interesting because Jamie is — since they both are fans of pain — kind of the other side of the coin of him. Like, we know that Jamie also takes a bit of pleasure from pain.

TM: I think it’s the calculation of it, the precision of it, is what’s unnerving. I was very keen that that was the case, really — that it is Jack psychologically, emotionally dismantling Jamie and his constituent parts.

N: Ron and the writers do such a great job in walking that gray line of tackling these subjects but also giving them the service and the context that they’re due in order to make them compelling and real.

TM: I think that’s right, they’re not pulling their punches. It’s a further unfolding of the ingredients that were sort of seeded in the first half. It just goes further; in a slightly clearer way we see his sadism at work. The precision, attention to detail, that is where the darkness really lies. Obviously the violence is unpleasant, but it’s how the violence is conducted — it’s not out of fury or anger or loss of control, it’s actually coming out of the opposite, and I think that is all the more unnerving. We find out more about the actual behavior of this quality.

N: What did you think about the scene with Jenny?

TM: Obviously one of the main, terminal things was the issue that he wasn’t able to get it up and she laughs at him and getting the picture of that right. I didn’t want it to be about the homosexuality or about the fact that he was only turned on by men, I wanted it to be something about the fact that it was almost a schoolground humiliation. That she sort of plugged into something ancient in him and it’s a sort of, the odder the better, really. It needed to be that he really wasn’t, necessarily, unmanned or weakened by it — it was just that he almost failed but it still had a danger in it; we didn’t want to diminished Jack too much in terms of what he represents for everyone. I think it turns out [laughs] relatively creepy.

N: Yes, and it’s super unsettling but also wildly subversive given how it plays out with her laughing and sort of taking control in a way that probably didn’t work out to the woman’s advantage all that often. [laughs]

TM: That again makes it sort of psychological and interesting. Maybe the only sort of defense against this sort of tyranny is ridicule, is humor. Satire, you know.

N: It’s an interesting place to put the audience.

TM: Yeah you see someone who, whatever you think of how he does it or how reprehensible maybe the behavior is, it is someone expressing themselves, expressing their true nature however unnerving it is. And that’s always interesting, I think.