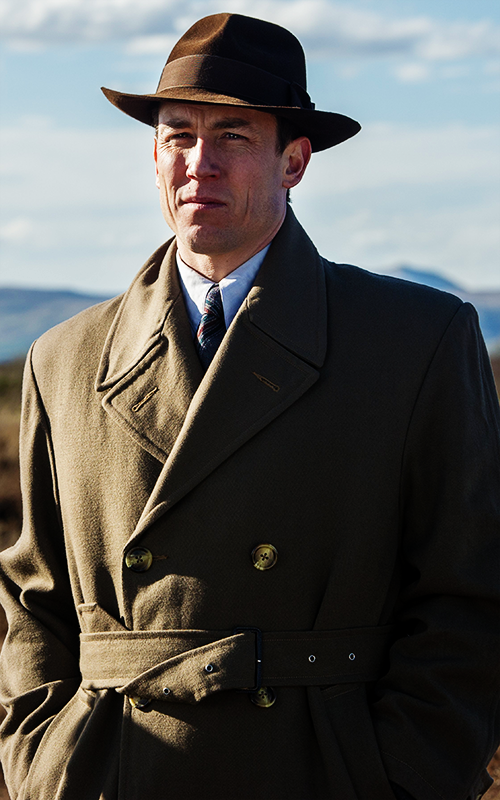 Starz’s time-traveling romance drama is back for season two.

Meanwhile, they also have to dodge Frank’s ancestor, Jack Randall (also played by Menzies), the villainous English knight who ends up capturing and horrifically torturing Jamie in the season’s final episodes.

File this under: it’s complicated.

The 42-year-old English actor — also known for his roles on “Game of Thones” and “Rome” — speaks with us about playing two vastly different characters and what’s in-store for the upcoming season.

What’s been your approach playing such opposite characters who also happen to be distantly related? Are they similar at all despite having totally different approaches to life? Jack is brutally sadistic, while Frank remains so loyal and dedicated to Claire.
They’re both quite different psychologies. [I’ve] explored the distinctions between them, but found moments where we’ve seen Jack in Frank and vice-versa. There’s a lot of complexity and shading.
In the broadest terms, they’re from different time periods. One is a modern man and the other is a pre-modern man. They’ve both gone through wars. Jack is the product of the Jacobite war and Frank WWII, [though] they’ve arguably come to different conclusions. In some ways, Jack abandons a sort of moral code and chooses to express his less rational and less civilized appetites and Frank, despite having similar traumatic experiences, doesn’t choose that route. You could argue that he has a remarkable woman in Claire and that’s why he’s different.

Jack and Jamie interactions are volatile from the very beginning.
He is drawn to Jamie because maybe Jamie is everything that Jack has lost. Jaime has a profound honor to him, a moral compass that is apparently unshakable. That is very enticing and intriguing to Jack. But that interest is with desire to hurt and dismantle him.

What have the fan responses been like to Jack — especially after that scene?
I hope they enjoy the expression of human polarity in the piece. All dramas need that breath of expression. Jack — though sometimes very violent and destructive and hard to watch — he’s an antidote to overly sunny, romantic aspects. Nobody wants to see a show where there’s wall-to-wall people having fun. We watch drama to see jeopardy and see situations we hope not to experience in our own lives. To that end, I think Jack is a very important ingredient to the show.

Any new faces we should be watching out for in season two?
There’s a great new cast. Andrew Gower is playing Prince Charlie. There’s a lot to enjoy going into the French court, which is the start of the second season. There’s a different feel, fresh blood.