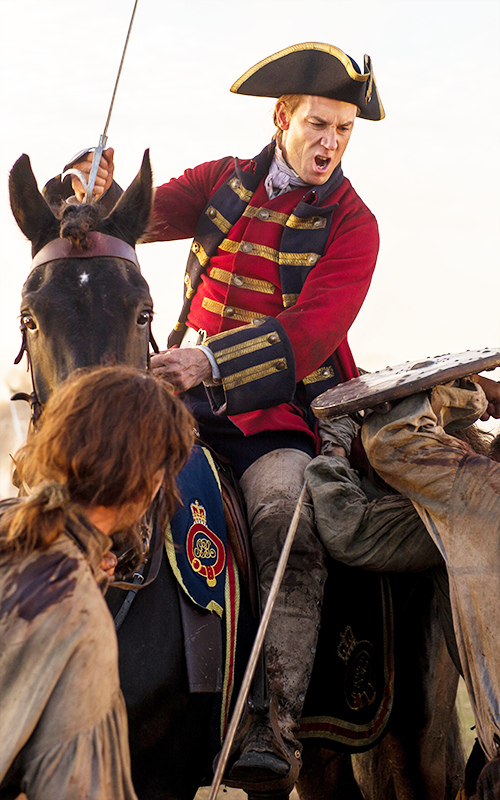 Salon talks to the actor about his time with the Starz seriesSpoiler alert: If you’ve haven’t seen the “Outlander” episode “All Debts Paid,” please find another article to read!

Some would say Claire Randall Fraser is the luckiest woman alive. In Starz’s “Outlander” and Diana Gabaldon’s novels, upon which the series is based, Claire has the love of two great men, Jamie Fraser (Sam Heughan) and Frank Randall (Tobias Menzies) and literally fell into a loophole that enables her to marry each of them and not commit adultery.

But every loophole comes with costs that few foresee. Claire hasn’t committed adultery, but she finds she can only be loyal to one man, Jamie, who she knows still exists in the 18th century. Woefully, Claire is in the 20th with her first husband Frank, who still loves her but for whom she can only muster amity.

“It becomes quite sad and a kind of resignation by the end,” Menzies told Salon in an interview conducted prior to the season. “They’ve kind of punched each other out.”

Frank and Claire did try their best, though. By 1956 they’ve come to an arrangement largely for the sake of Brianna, as we discover in “All Debts Paid,” the third episode of season 3. Frank’s love for Brianna is greater than the affection he has for Claire — but, as we discover, even that’s not enough to sustain them.

Executive producer Maril Davis admitted that some fans would rather see more of Claire and Jamie than witness the end of Claire and Frank. “But for me, that relationship between Claire and Frank and seeing what happens, if anything, just shows what a great love Jamie and Claire have because Frank is a good guy,” she said. “Even though you’re seeing them apart, and you’re seeing Claire with the Frank relationship, to me, it’s constantly reminding you that her great love for Jamie and obviously, in Jamie’s story, as well, Claire is never far from his mind. They’re still both very much alive in each others’ stories, and I think, to me, makes the reunion even sweeter once they finally get together.”

That’s not really a spoiler, is it? “Outlander” would have no reason to continue without Jamie and Claire finding one another again.

But “All Debts Paid” marks the end of the road for Claire and Frank — and, sadly, Menzies’ time on the drama.

Frank may have sentenced himself to emotional imprisonment via marriage, but in 1755, Jamie is an actual inmate in Ardsmuir Prison, which gets a new governor, Lord John William Grey (David Berry) — the same Grey whose family debt led to Jamie’s life being spared after Culloden — as the episode begins.

Lord Grey forms a bond with Jamie, who is seen as a leader in the prison, and calls upon him to translate the ravings of a man the British found wandering the moors, who only speaks French, Gaelic and a bit of English.

What English he does utter is “the gold is cursed,” and Grey believes the man may be talking about a legendary treasure hidden some place in Scotland. When Jamie speaks to the man right before he dies, the man says something about a “white witch,” which Jamie thinks may refer to Claire.

Jamie confides this to John during a game of chess. And seeing a tenderness in his confidence, John makes a pass at Jamie, who trembles angrily (for good reason) and rejects him with a threat to kill him. John withdraws with a tear lingering in his eye.

Before this, Jamie orchestrates his escape under the ruse of gaining hunting and trapping rights for his starving fellow prisoners, knowing John would find him and perhaps agree to kill him. But John does not do that, and afterward, by way of explaining that the French gold is only a legend, Jamie gives John a blue sapphire he saved in case he were to be freed.

Later, when the prison is closed, the rest of the inmates are shipped off to the colonies to serve out terms of indentured servitude. But John Grey leads Jamie away on a three-day march in the cold, then releases him within walking distance of a large estate, explaining he cannot commute his sentence without royal approval. So Grey found him a servant’s position within the estate and cautions him to go by an assumed name.

When Jamie asks why John is letting him go, John tells him, “You gave me my life all those years ago. Now I give you yours. I hope you use it well.”

John Grey cares for Jamie deeply. And in 1956, we see Frank still has enough affection for Claire to treat her and Brianna to a full English breakfast, but when Claire suggest they go on a movie date to see “The Searchers” or “Carousel,” Frank reveals he’s seen them both . . . with someone else. “I’m being discreet.”

But once Brianna turns 18 and graduates, Frank gains a position at Cambridge and asks Claire for a divorce. Frank says he wants to live the rest of his life with a wife who truly loves him, something a good man such as he deserves. But Claire and Frank never get that divorce. He leaves the house, and the next time Claire confronts her first husband is in the morgue: He’s been killed in a car accident. “If you’re still close enough to hear me, I did love you very much. You were my first love.”

Menzies, for his part, hopes the audience’s heart isn’t broken too terribly by the slow fade of Claire and Frank’s marriage. But he also believes their situation may be more relatable to people these days than the outsized romance that holds the series center.

“I’m sure everyone has an understanding of what it is to be maybe in a relationship which isn’t reciprocated,” he said. “It’s an exploration of sort of compromised or imperfect love, which obviously is most people’s experience in love. Not the kind of more romantic, dashing version of love we see in other parts of the show. So, that feels modern and I think, maybe, it feels like a good antidote to some of the other ingredients of the show.”

Frank was written to lose this fight, which Menzies knew going into “Outlander.” From the producers’ point of view, however, creating the end of Claire and Frank’s relationship provided an opportunity to explore the other side of this epic romance.

“The books talk about this period in their lives, but it’s sort of scattered over different sections,” explained executive producer Ronald D. Moore. “We just kind of collated all that together. We wanted to simply tell that story . . . It just felt like a nice parallel construct to sort of get us to the point where [Jamie and Claire] would reunite once more.”

Don’t cry too much for Menzies, folks. He’s an actor in demand, and has popped up in a number of series, even while playing two different roles — Frank and Black Jack Randall — in this one. In “Game of Thrones,” Menzies portrays Edmure Tully. He’s also popped up in AMC’s miniseries “The Night Manager” and Amazon’s “Catastrophe.”

As for which Randall Menzies will miss more, “I feel it’s like a cheating answer if you go, ‘Both!’ But, I mean Jack tends to have more of the fireworks, tends to be kind of maybe more inherently dramatic. But, there was a huge soul and sort of feeling in the Frank stuff. It’s such an unusual premise for TV show to have, and to be asked to do.”

Frank’s presence isn’t completely gone from this season, mind you. “Outlander” producers allow Claire and Brianna to grieve their loss and therefore vicariously allow fans to say goodbye to Menzies.

“It’s been a great journey,” he admitted. “We’re all family and I’ve made some really great friends. It’s been a great three and a half years on the show. But, it’s also fun to move on to pastures new.”